A host of stars from all around Europe will be missing out on the multi-city international tournament this summer. Euro 2020 will play host ... 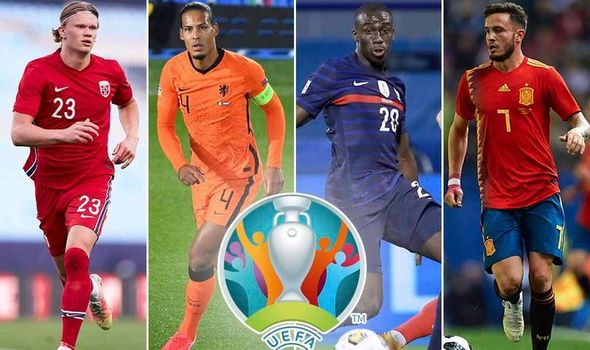 A host of stars from all around Europe will be missing out on the multi-city international tournament this summer.

Euro 2020 will play host to Europe's biggest names this summer as 20 nations prepare to battle to become champions. But injuries can always play an important part in denying some of the most talented players their chance to shine on the international stage.

England boss Gareth Southgate named his 33-man preliminary squad only last week but, in the space of two games, he has been left to sweat over the fitness of two key players in Harry Maguire and Jordan Henderson.

Injuries can often mean other players are given their opportunity to make an unlikely appearance on the world stage, while there are a handful of high-profile stars will miss out on the tournament altogether as their country failed to qualify.

That list of countries includes the Republic of Ireland, Serbia, Norway and Slovenia, despite the tournament being increased in its size from 16 teams in 2016.

So, which players have missed the cut ahead of this summer's tournament?

Arguably the best goalkeeper in the world, Jan Oblak would have been disappointed to miss out on the chance to participate in Euro 2020.

The 29-year-old tasted success with the LaLiga outfit as they sealed a superb domestic title triumph, their first since 2014, on the final day of the season.

The Atletico Madrid goalkeeper was in between the sticks for Slovenia’s narrow 3-2 defeat to Poland, which meant North Macedonia beat them in qualifying for the Play-offs.

As fate would have it, Alexander-Arnold was just not supposed to go to Euro 2020 this summer.

The 21-year-old was left out of Gareth Southgate’s squad in March before working hard to win back his place for the 33-man preliminary list for Euro 2020.

But he picked up a thigh injury during the 1-0 win over Austria and he will now miss the tournament altogether, with Three Lions boss Southgate calling up Ben White as his replacement.

Spain head coach Luis Enrique whipped up a storm when he decided not to name any Real Madrid players for his final Euro 2020 squad — and that included Ramos.

But it looks like he has made his last appearance for La Roja after being snubbed by Enrique, with a preference for more youthful defenders such as Pau Torres.

Liverpool fans will be somewhat relieved their most important defender has opted to take part in pre-season than going to Euro 2020 on the back of a serious injury.

Van Dijk sustained an ACL injury in October and is close to completing his rehabilitation. There had been suggestions that he could return for the tournament, but the Netherlands international made the tough decision to stay at home.

“With everything that is going on, I feel physically it is the right decision that I’ve decided not to go to the Euros and to go into my last phase of rehab during the off-season,” he said.

“So, the full focus will be on pre-season with the club and that’s a realistic goal, so I am looking forward to that. Obviously I am very gutted to miss the Euros.”

It is a strange sight that one of the world’s most expensive left-backs cannot get into the France national team.

Mendy has been a regular fixture at Real Madrid this season and performed to a decent standard, so the decision from Didier Deschamps to leave him at home, in favour for Lucas Digne, is all the more baffling.

Much was made of the Lazio playmaker’s involvement in Serbia’s World Cup squad three years ago after catching the attention of Europe’s top clubs.

Despite after another solid season in Italy, the 26-year-old will be left at home to watch the tournament along with fellow Serbia stars Aleksandar Mitrovic and Dusan Tadic after they were beaten on penalties by Scotland in the Play-Offs.

A shock absentee from the Spain squad. For a player of Saul’s quality to be overlooked by Enrique suggests there is more to his omission than meets the eye.

The 26-year-old has been linked with Bayern Munich and Chelsea in recent days and while it’s safe to assume he did not enjoy deputising at left-back with Atletico this season, he remains one of the best central midfielders in the world.

There are no winners from him missing Euro 2020, except perhaps for Spain’s opponents.

It was a late call but probably the correct one.

Greenwood was taken off midway through the second half of the Europa League final defeat to Villarreal due to exhaustion and the 19-year-old admitted he had concerns over his fitness levels.

Both Greenwood and his club Manchester United decided that sending the teenager to an international tournament, on the back of a 52-game season, would burn out the youngster and he was cut from the squad.

Germany will once again be without Marco Reus for an international tournament, but this time the attacker it was his decision.

The forward is not injured but, like so many players in the jam-packed 2020-21 season, he has struggled for fitness and Reus will use the summer to recharge his batteries.

Unlike his Spain colleagues Ramos and Saul, it was injury that ruled out Barcelona starlet Ansu Fati out of contention.

The 19-year-old suffered a knee injury in November playing for Barcelona and has since gone under the knife three times to repair the damage.

He will travel with the squad to the tournament to watch his colleagues in action by Enrique, albeit with a feeling of sadness after being sidelined.

Unlike his Spain colleagues Ramos and Saul, it was injury that ruled out Barcelona starlet Ansu Fati out of contention.

The 19-year-old suffered a knee injury in November playing for Barcelona and has since gone under the knife three times to repair the damage.

He will travel with the squad to the tournament to watch his colleagues in action by Enrique, albeit with a feeling of sadness after being sidelined.

Given his exploits in the Bundesliga and Champions League this season, it is a shame that Erling Haaland, one of the world’s most in-form strikers, will not be strutting his stuff at the Euros this summer.

The 20-year-old has scored 41 goals for his club Dortmund this season and bagged seven goals in his first 12 caps for the Nordic nation. But with Norway failing to qualify, Haaland will be an observer rather than star name at the tournament.

At least football fans will have Robert Lewandoswki and Kylian Mbappe in action to admire.