France beat Bulgaria 3-0 in their final Euro 2020 warmup game on Tuesday evening. An acrobatic first-half strike from Antoine Griezmann an... 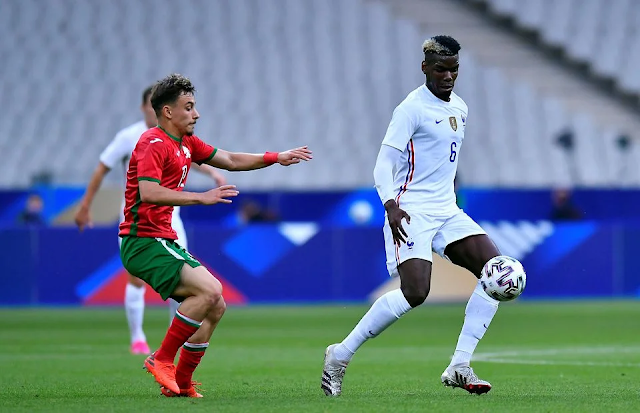 An acrobatic first-half strike from Antoine Griezmann and a late brace from substitute Olivier Giroud sealed a relatively easy victory for Didier Deschamps' side.

It did appear as if there would be some very bad news for Les Bleus from the match, though, with the returning Karim Benzema having to be taken off in the opening period with an injury.

Thankfully, the knock doesn't appear to be a serious one, with Deschamps stating after the game: "He took a good hit on the muscle above the knee. He felt that it was hardening, so we took no risks."

So all in all, it was a fairly decent night for the nation being tipped by most to prevail at Euro 2020.

The team's standout performer against Bulgaria was unquestionably Paul Pogba, the Manchester United man dominating the middle of the park throughout the entirety of the match.

He toyed with the visiting side, delivering accurate long-range passes for fun, producing snippets of divine skill, breezing past defenders like they weren't even there and - above all - creating chances for his teammates.

It was a midfield masterclass from the mercurial Frenchman and you can enjoy his individual highlights from France's 3-0 victory over Bulgaria below.

When Pogba is at the top of his game, he is an absolute joy to watch.

The 28-year-old makes it all look so easy and his stellar display against Bulgaria was a timely reminder as to why France are the team to fear at Euro 2020.

An in-form Pogba, who's protected by N'Golo Kante, feeding the likes of Griezmann, Benzema, and Kylian Mbappe? That really is a terrifying prospect for the rest of the nations partaking in the tournament.

It's no wonder former Arsenal manager and FIFA's chief of global football development Arsene Wenger has labelled his country as "super favourite" to win Euro 2020.

"They are not the favourites, they are the super favourite," he told Sky Sports prior to the game against Bulgaria.

"Favourite is not big enough, because when you win the World Cup and then you have in your team, (N'Golo) Kante, (Paul) Pogba, (Karim) Benzema, (Antoine) Griezmann, (Kingsley) Coman, (Olivier) Giroud, I forget half of them. (Ousmane) Dembele.

"You will have on the bench 11 players who would play basically in any other national team. So you cannot refuse the fact that you are world champion and it's a team which has not peaked.

"It's a team that's still going up, because they're all young these guys. Apart from two or three, the core of the team is very young."