Euro 2020 matchday one: Delayed tournament kicks off in Rome

Italy take on Turkey in the opening match on Friday. Twelve months after it had been due to kick off, Euro 2020 finally gets under way in ... 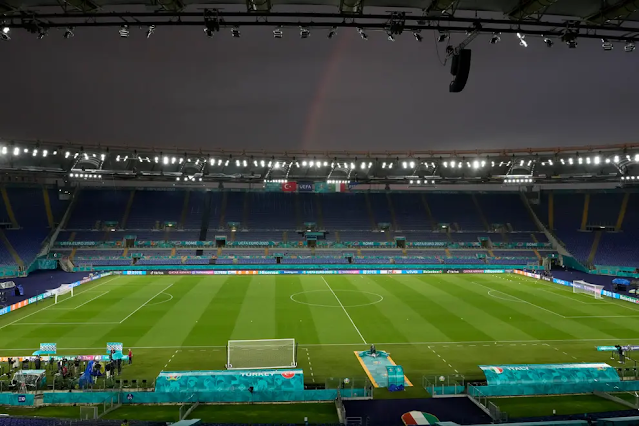 Italy take on Turkey in the opening match on Friday.

Twelve months after it had been due to kick off, Euro 2020 finally gets under way in Rome on Friday night when Italy take on Turkey in the opening game of the tournament in Group A.

A new-look championship is in store – and not only because of the coronavirus-enforced postponement and ongoing Covid-19 restrictions limiting the number of fans who can attend matches.

For the first time the event will be held across the continent, with 11 host cities from London to Seville to Baku staging games.

Three home nations – England Wales and Scotland – are among the 24 qualified teams and the former two get their campaigns under way over the first weekend.

The centre-back gave England a key fitness boost as he returned to training following the ankle ligament damage he suffered playing for Manchester United last month.

A rejuvenated Italy take on dark horses Turkey at 8pm on Friday. Rome’s Stadio Olimpico will be at 25 per cent capacity for the match, meaning around 16,000 fans will be in the stadium. Italy, managed by former Manchester City boss Roberto Mancini qualified with a 100 per cent record following their failure to get to the 2018 World Cup finals. But Turkey finished only two points behind France in their qualifying group, beating the world champions along the way.

Wales on the road

The Euro 2016 semi-finalists will be more than 3,000 miles from home when they take on Switzerland in Baku at 2pm on Saturday in the other match in Group A. Aaron Ramsey, one of the architects of their run to the last four five years ago but who has struggled for fitness during his two years at Juventus, sat out training on Thursday, but insisted it was a “planned” decision and that he was “all good and looking forward” to the opener.

England’s chief fitness concern, Maguire, was back in training ahead of their Group D clash with Croatia at Wembley at 2pm on Sunday. His availability for the match still looks questionable, though, while Jordan Henderson is also working his way back to full fitness. The game gives Gareth Southgate’s side the chance to exact revenge for their agonising 2018 World Cup semi-final defeat, but this is a very different England squad to the one which travelled to Russia, while Croatia’s ageing stars are on the wane.

Supporters are set to be present at every venue, albeit in varying numbers. Wembley is due to welcome 22,500 fans for England’s match with Croatia, while Scotland are set to play their Group D opener with Czech Republic on Monday in front of 12,000 spectators at Hampden Park. The Puskas Arena in Budapest is the only stadium currently due to operate at full capacity.