As reported by  Telefoot’s  Julien Maynard, both Antoine Griezmann and Karim Benzema are struggling with injury problems in the build-up t... 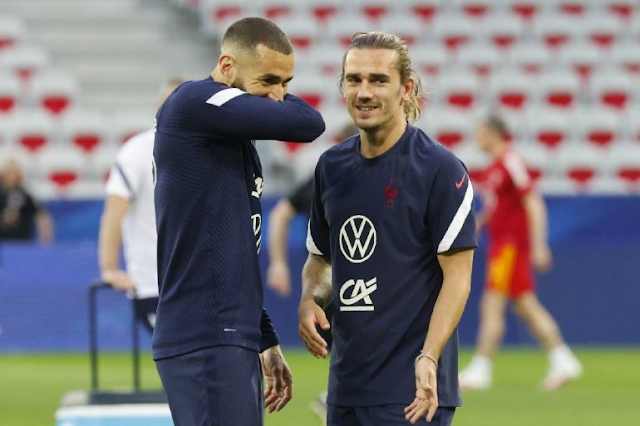 As reported by Telefoot’s Julien Maynard, both Antoine Griezmann and Karim Benzema are struggling with injury problems in the build-up to Euro 2020.

France are widely regarded as one of the favourites to go all the way at Euro 2020, having won the World Cup in 2018 and reached the Euro 2016 final.

However, their preparation for their Euro 2020 campaign, which begins with a clash against the Germans on Tuesday, has not been seamless, as Julien Maynard reports.

The Telefoot reporter has taken to Twitter to reveal that Antoine Griezmann has suffered a contusion to his calf, the severity of which is at this point unknown.

As a result, he is training inside, rather than the rest of the France squad, alongside Karim Benzema, who left the field of play injured against Bulgaria on Tuesday night.

You wouldn’t expect either player to be ruled out of the competition in its entirety, but with France having both Germany and Portugal in their squad, they need to be quick out of the blocks.

If they were to take to the field without either Griezmann or Benzema, it would be a major blow to Didier Deschamps’ mens’ hopes of kicking things off with a victory.