'I promise I don’t want to take your place' - Kylian Mbappé talks Neymar, Messi and Haaland

PSG superstar Kylian Mbappé reassured Neymar he wasn't trying to upstage him when the French superstar returned to Paris after winning the 2018 World Cup.

In a wide-ranging interview with Esquire, 22-year-old Mbappé discusses the impact fame has had on his life, along with his status in the modern hierarchy of football greatness.

Another France win at Euro 2020 may confirm Mbappé's standing as the world's best, but he is adamant he has some way to go to match the standards set by Lionel Messi and Cristiano Ronaldo.

“It’s not only me who knows that, everyone knows it," he says. "If you tell yourself that you’ll do better than them, it’s beyond ego or determination — it’s lack of awareness. Those players are incomparable. They have broken all laws of statistics. They have had 10 extraordinary years, 15.”

“You do always compare yourself with the best in your sport, just as the baker compares himself with the best bakers around him. Who makes the best croissant, the best pain au chocolat? I watch matches of other great players to see what they’re doing. ‘I know how to do this, but can the other guy do it too?’ I think other players watch me, too. I think that pushes players to raise their game, just as Messi was good for Ronaldo and Ronaldo was good for Messi.”

His PSG teammate Neymar once figured more prominently in those conversations and it was one of Mbappé's priorities to smooth any jealously the Brazilian might have felt following France's World Cup success, in which Mbappé starred.

“I’m not going to walk on your flowerbeds," he told Neymar. "I’ll be a candidate for the Ballon d’Or this year because you won’t be, but I promise I don’t want to take your place.”

Mbappé is open about the way Neymar is perceived in France, where a preoccupation with off-field pursuits such as poker is not always appreciated.

“In Brazil, they are more festive, in France more serious. Here it’s not considered good to display your passions. People will think he’s neglecting PSG because he plays poker. I think he has begun to understand that.

"At first it was hard for him because he experienced it as an affront. When he arrived, they put his face on the Eiffel Tower, and six months later they’re asking him why he’s playing poker. In France, people know what you have but they don’t want to see it. They just want to see you playing football, smiling.”

On stardom, Mbappé admits his high profile has come at a price.

“It takes an organisation just to go out.

“A fan gives you enormous love, but sometimes maybe an excess of love, and he might not respect your intimacy. We give our lives to the people, because we give them pleasure every three days, and we give them our time. It’s impossible to hope for a normal life, but just a little respect for one’s private life isn’t too much to ask for, I think.”

“It’s his second year, we’re getting to know him. It’s the start for him. I’m happy for him, for what he’s doing.” 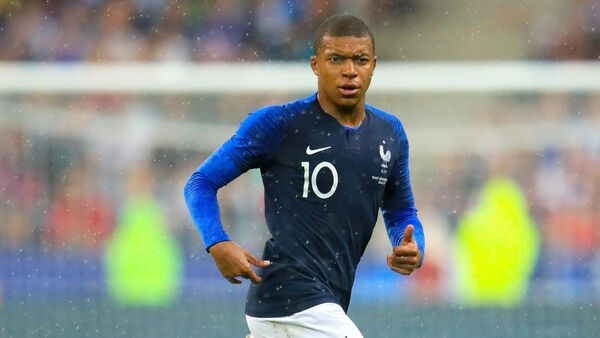