Jesse Lingard has revealed how much he enjoyed his loan spell at West Ham crediting Mark Noble for welcoming him into the squad and helping him to settle in.

Part of the reason for Lingard to join the Hammers was to try and force his way back into international contention and a spot in Gareth Southgate's Euro 2020 squad.

The 28-year-old's fine form on his arrival at the London Stadium saw him called up for the April FIFA World Cup qualifiers, receiving the Player of the Match award against San Marino, and a spot in the provisional 33-man European Championship squad.

However, with Southgate only able to name a 26-man final party Lingard was one of the seven not to make the final list.

However, there is still hope for the attacking-midfielder after Trent Alexander-Arnold's unfortunate injury in the friendly against Austria.

Lingard started the match and played a pivotal role in the game's only goal and could be the beneficiary of the Liverpool star's misfortune.

Despite being offered the chance to return home after being informed he was not in Southgate's final squad Lingard remained to show his commitment to the cause and now has a chance at competing in his second major international tournament.

Alexander-Arnold's replacement will be named after the final pre-tournament friendly on Sunday against Romania but Lingard faces competition from James Ward-Prowse, Ben White, Ben Godfrey and Ollie Watkins.

Life at West Ham has treated Lingard well following a tough spell out of the team at Old Trafford.

The Manchester United player had fallen down Ole Gunnar Solskjaer's pecking order and his move to the Hammers gave him the opportunity to play regular first-team football.

"Obviously playing week in, week out, that was the main thing at first you know I just wanted to play football and enjoy my time."

Lingard said that club captain Noble played a key role in helping him feel comfortable following his January move and revealed a major difference between the Hammers squad and that of Manchester United.

"When you have people like Nobes and the rest of the players and staff around you that welcome you, you know you settle in fairly quickly and since the Villa game I settled in straight away, scoring two goals and it kind of set me off from there," Lingard said.

"Obviously it’s a lot different [at West Ham compared to Man United]. I just feel like going to West Ham you know Nobes, I remember on one of the first days I went there, I was getting in the car with him to go to the airport for a game and he was like ‘Don’t be on your phone, we conversate’ and it was little things like that, back at Man United you’re always on your phone.

"Nobes kind of brought that out in a team and that changed my mindset a little bit and I think it’s just a matter of maturing and becoming more responsible during my time there. And I think Mark Noble has obviously helped me do that."

David Moyes has made no secret of his desire to see Lingard return to West Ham next season: "I hope Jesse is here [next season]," the Scot said at the end of the campaign.

"We would like to keep him but there is no guarantee, he is not our player. He has done an exceptional job for us on loan and we will see where we go from there."

He added: "So yes. I would like to keep Jesse." 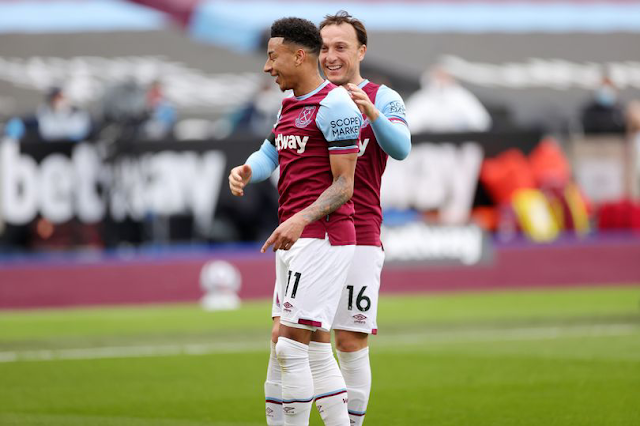