Legendary Scotland goalkeeper Alan Rough has met with care home residents in Glasgow ahead of the country’s Euro 2020 clash against Englan... 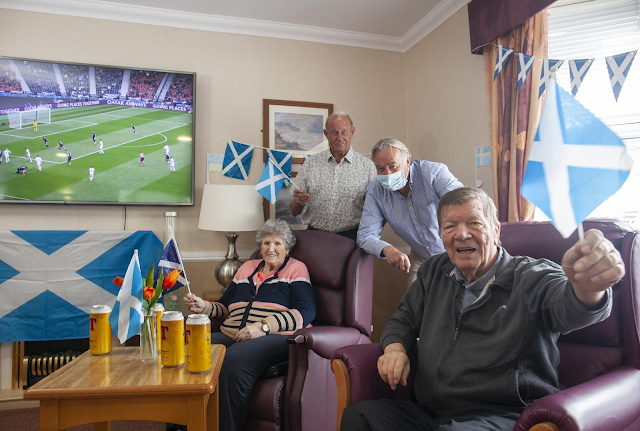 Legendary Scotland goalkeeper Alan Rough has met with care home residents in Glasgow ahead of the country’s Euro 2020 clash against England.

Rough, who played in two World Cups and has 53 caps, joined football fans at Renaissance Care’s Croftbank House Care Home to discuss the Czech defeat and their hopes for the crunch match on Friday.

He praised the care home staff for helping get the residents geared up for the match, which he said he hopes will be “one for the history books”.

Former Hibs and Partick Thistle keeper Rough said: “The result on Monday wasn’t what we’d hoped, but the beauty of the game is that it gives people of all ages, from across the country, something to bond and connect over.

“It was great speaking to residents about some of the old games I played in, and there’s nothing better than a post-game debrief with fans who know their stuff.

“The home did an amazing job putting all this together and getting the pre-game buzz just right.

“All the best to the Scotland team tomorrow.

“Hopefully this is one for the history books.”

The visit from the 69-year-old, known as Roughie to football fans across the nation, was a dream come true for resident Jim Kennedy.

The 85-year-old has followed the former goalkeeper’s career from his Partick Thistle days to his last match with England more than 40 years ago.

Mr Kennedy, who had a short career as a striker for the club in the 1960s, enjoyed Rough’s stories from the 1977 Scotland v England game which saw Scotland fans storm the pitch after winning 2-1.

The game went down in Scottish football folklore, and Mr Kennedy still counts it as one of his most memorable moments of all time.

Mr Kennedy said: “When I think of Scottish football, that game is still what comes to mind.

“Roughie was in goals and fended off the English side helping us win our first game in 10 years at Wembley.”

Residents at the care home will be treated to a pie and a pint while watching the national team, the first time they have been able to do so since before lockdown.