BARCELONA:  Sergio Aguero said on Monday (Tuesday in Manila) he was hoping to have the "pleasure" of playing alongside Lionel Me... 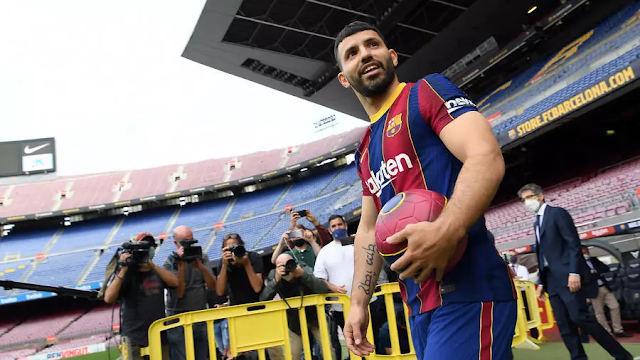 BARCELONA: Sergio Aguero said on Monday (Tuesday in Manila) he was hoping to have the "pleasure" of playing alongside Lionel Messi after signing a two-year deal with Barcelona.

Aguero will become a Barca player once his contract with Manchester City expires at the end of June, bringing an end to a decade at the Premier League champions, and his new team have slapped a 100-million-euro ($122 million) buy-out clause on the 32-year-old.

However he is still not sure Messi will be his teammate next season as the club captain is yet to sign an extension to his current contract which expires next month.

"Let's hope we play together. What happens with Leo is down to decisions he will make with the club," Aguero told reporters at the Camp Nou after he was unveiled on the famous pitch.

"Obviously it will be a pleasure if we play together. If he continues here, which I think he will, we will try to do our best for the club as he always has done."

Barca will hope Aguero's arrival in Catalonia helps to convince his friend and fellow Argentine Messi to stay, as the club faces declining performances on the pitch and a worrying financial situation.

Ronald Koeman's side finished third in La Liga this past season and have debts of 1.2 billion euros ($1.46 billion).

They were knocked out of the Champions League at the last-16 stage by Paris Saint-Germain, and could yet face sanctions from UEFA for refusing to back out of the short-lived European Super League project.