The second-half of last night's Under-21s European Championships quarter-final between Portugal and Italy proved to be a disaster for Ma... 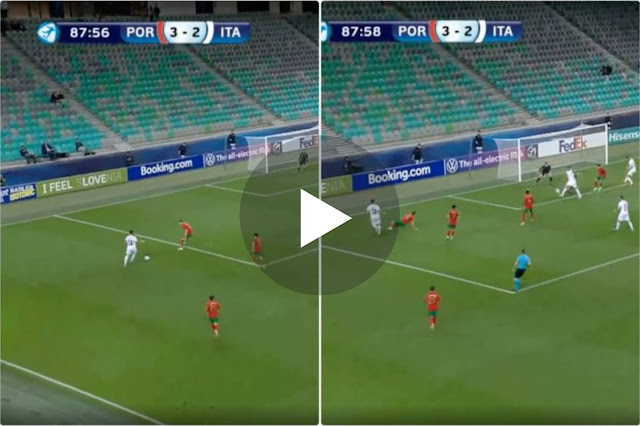 The second-half of last night's Under-21s European Championships quarter-final between Portugal and Italy proved to be a disaster for Manchester United star Diogo Dalot.

In the 87th minute of the tie, Portugal found themselves in all sorts of trouble after an Italy defender unexpectedly looped the ball over to Riccardo Sottil.

Sottil glided down the left-wing, skipping away from a challenge by Francisco Conceicao – the son of Porto manager Sergio, before he faced up against Dalot.

The Fiorentina wide-man charged at the Man United full-back before easily knocking the ball to his left and firing in a low cross, a move that left Dalot outstretched and leaving him to slip to the floor.

Wolves striker Patrick Cutrone darted across to the near post and flicked the ball into the back of the net, marking a comeback for Italy, who made it 3-3 and sent the tie to extra-time.

Dalot was also left looking shaky for Italy’s second goal, the ace, who spent this season on loan at AC Milan, completely froze, allowing one of the Azzurri’s strikers to score.

United fans would’ve been hoping that Dalot could impress in this tournament, firing himself into contention in the eyes of Ole Gunnar Solskjaer for next season, but it’s started off shakily for the ace.