In the 59th minute of this evening’s Under-21s European Championships quarter-final between Portugal and Italy, Manchester United star Diogo... 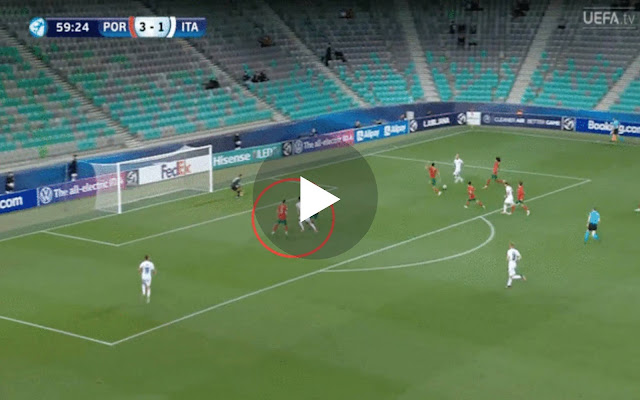 In the 59th minute of this evening’s Under-21s European Championships quarter-final between Portugal and Italy, Manchester United star Diogo Dalot looked shaky at the back in a moment that hurt his side.

Giacomo Raspadori spearheaded a move that would showcase the best from three of Sassuolo’s young talents as he turned whilst controlling the ball after a drilled pass out of the Italy defence.

Raspadori drove forward before he slipped the ball into another Sassuolo talent in Davide Frattesi, who drilled in a low cross first time.

Frattesi’s delivery was turned into the back by another club and country teammate as Gianluca Scamacca tapped the ball into the back of the net from six yards out.

As cutting a move as this was from the Sassuolo trio, it only ended in a goal due to some sloppy play from Manchester United talent Diogo Dalot.

Scamacca was in between Dalot and Portugal Under-21s centre-back Diogo Quieros before the ball came in but Dalot was frozen whilst the defender that shares his forename recklessly slid down.

Dalot electing to essentially stand still left Scamacca to dart forward and poke home, it’s unclear what the Red Devils star was actually trying to do.

The 22-year-old either experienced a dangerous lapse in concentration that allowed Italy to score or himself and his fellow Diogo were attempting an incredibly risky offside trap in the six-yard area.

With Dalot seeing minimal action for United in 19/20, the rapid full-back was loaned out to AC Milan this season, where he started 20 of his 33 appearances across all competitions.

Dalot showed some promise for the Rossoneri but saw the bulk of his action in the Europa League, mostly against respectfully weaker opposition like Celtic, Red Star and Sparta Prague.

The promising talent that Jose Mourinho recruited for a fee of £19m, per BBC Sport, didn’t really nail down any consistent runs as a starter for Milan in their Serie A fixtures.